Reviews mean so much to authors. This one in particular is a great review of my book Heckled.
If you’ve read any of my books, please consider leaving a review. I’d love to know what you think! 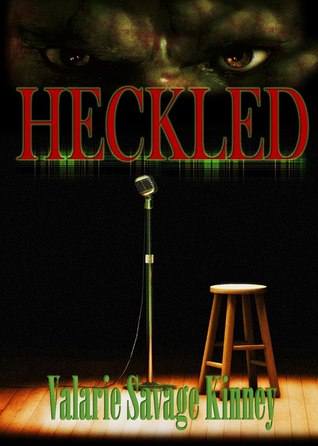 *I was provided a copy of Heckled by the author in exchange for an honest review. I am not compensated for my honest opinion.*

Exxel Jensen has spent his entire life finding ways to cope with his mental illness. Although his family and friends know he’s depressed, they really don’t know the true extent of it. Exxel lives with another person in his world, a person no one else can see or hear—the Heckler. Drinking, drugs, and cutting help Exxel banish the Heckler, but only temporarily. Exxel has a loving and supportive wife who would do anything to help him, and he also has a baby on the way. He should be happy, but happiness is the one thing Exxel can’t feel.

Heckled is a dark drama that draws you in to the main character’s world from the start. The…

I decided a while back to write a birth story for each of my four kids. I wrote one for each of my girls within the last couple of years and since tomorrow is my oldest son’s sixteenth birthday, today I’m writing his.

My due date was April 2nd, 2000 and I was already four days past that. My two little girls were two and a half and almost four and my husband worked third shift a couple of towns away from where we lived. We had planned to drop our daughters off at my sister’s house when I went into labor, but it felt like it had been so many years since I had passed my due date that we had sort of given up thinking that might ever happen. Clearly, I was just going to stay pregnant forever. And ever.

On April sixth, my husband left around ten p.m. for work and I waddled to bed to try and sleep. I couldn’t get comfortable, and just about quarter after eleven realized I was having some contractions. For some idiotic reason I can’t even explain other than I read it somewhere in some magazine, I got up and decided to take a shower. This was a poor choice on my part, because this labor started out really fast and strong and within just a few minutes I was in so much pain I could no longer stand up. I was stuck in the shower and had nobody home to help me other than my little girls, who were sound asleep.

Eventually, I was able to crawl out of the tub and to the kitchen to the phone (remember, this was back before we all had a cell phone attached to us every second of every day). I called the factory where my husband worked at the time and gave a breathless message to the person in the office. Several minutes later, he called me back, listened to me shrieking for a minute or two, and headed home. It never crossed my mind to call my doctor. Again, I have no way to reason that out. It was dumb but I was tired and in a lot of pain. I very seriously thought I might have the baby on the living room floor, before my husband ever made it home.

Finally, he arrived and called our family doctor. She asked him to time my contractions, then listened to me screaming for a few minutes and told him they were WAY too close together for me to still be at home. Get going, she said. Go fast.

During a brief break between pains, I woke up my daughters and packed them a bag. Clearly out of my head with agony and excitement, I packed them a bunch of licorice. Can’t tell you why, only that in the moment, it seemed absolutely imperative. Then we called my sister, because that was our plan.

Problem was, she never picked up the phone. We called over and over again. No answer.

Instead, we drove the (very sleepy and confused and tightly gripping their licorice) girls to my husband’s parents’ house. At that point, I really, really thought I was not going to make it to the hospital in time.

One thing I knew I wanted to do was get some pain relief. I had had an emergency C-section with my first child, and my morphine line had a hole in it so I was in a lot of pain for a lot of hours after I woke up. With my second child, I requested an epidural, but it failed. This time, I was determined to get some wonderful pain meds, the kind I’d heard friends describe as “heaven”, which would reduce the hip-shattering agony I was currently experiencing to something along the lines of mild cramps. I thought about this all the way to the hospital.

When I shuffled in to the labor and delivery triage area at the hospital, I was breathless and barely able to talk. There was nobody at the desk, and I was certain that if I sat down in one of the chairs I would never get back up, so I just leaned forward on the desk, propping myself up with my elbows, and stood there. Shaking. After what seemed an eternity, a nurse found me and got me into a room.

“I want pain meds this time,” I replied.

She laughed. I didn’t.

After a quick check that told her I was already well past eight, she told me I was too far gone for any sort of substantial relief. Sorry, kid. That baby is coming too fast.

Things went pretty fast after that. I was moved down to a regular room, my doctor arrived, and so did my mom and siblings. My sister, as it turned out, had taken a few Tylenol PMs before bed and didn’t hear the phone ring when I called.

My first son was born at 2:52 a.m. on April 7th after just about three and a half hours of labor. He shares a birthday with my sister’s daughter, just fifteen years apart.

My doctor looked up at me and said, “All right, Val, I need you to push again, get that placenta out.”

I looked back at her and replied, “I’m done. If you want anything else, you can go in and get it yourself.”

I wasn’t kidding. Fast labors are kind of cool but the thing about them is, you end up feeling a lot like you’ve been run over by a semi truck once everything is said and done.

We had considered naming him Andrew, but couldn’t decide on a middle name. My husband went out to the nurse’s station and borrowed a baby name book. He came across the name Donovan and asked what I thought of it.

We thought about that for a few minutes, and then turned it around.

It fit him perfectly.

And tomorrow he turns sixteen.

Seven years ago on this date, my youngest son Bean was up early, telling me he had jokes planned for his friends at school, laughing already because he knew it was going to be so much fun.

I took the other three kids in to school (Bean was in afternoon kindergarten) and while I was gone, my mom called and told my husband my dad had collapsed while brushing his teeth in the bathroom and had fallen against the door, preventing her from being able to get in. She called 911 and then us. We hurried little Bean into the car and took off.

All the way there I kept thinking but he’s not sick and maybe he needs CPR, I can do that and Mom must be so scared but never in my mind did I think he was dead.

He was, though. When we arrived at the house, the ambulance was there and I ran in the door to see my dad on the floor in the hallway and my mom was screaming, “He’s not breathing! He’s not breathing!” I stumbled back out the door, fell on the cold garage floor and cried for my daddy. My brother and sister came just then, my sister with a half drunk bottle of orange pop in her hand, and she promptly bent over the grass of the front yard and threw up.

When we pulled into the hospital lot, the song that was playing on the radio was one called, “Dead and Gone.”

When the doctor came and told us that despite their best efforts, my dad was gone, my bones shook within me like they were going to explode and I felt so lost, so inadequate for the task set before me.

I had to start calling people.

My voice shook and seemed to echo in that terrible, stark room they had us in at the hospital. I hated that room so much. And the tissues provided were terrible, thin and scratchy and did not help much at all to sop up my tears.

I ran through the list of contacts in my mom’s cell phone and called my aunts first, then on down the list of people who needed to know.

One of those people asked me, as I spoke through muffled sobs, if this was an April Fool’s joke. Was I trying to be funny?

I’m not sure anyone would use death as a way to be funny, but no, I said, this is real.

Oh God, was it ever real.

It’s been seven years, now. Seven years without my dad.