It was so desperately hot that summer.

1997. We were living in a double-wide modular home, in a park not far from where we live now. The heat seemed like a living thing, a second skin that slithered over me and nestled in for the long haul. Even the middle of the night brought no relief; it was sticky and hot and even a thin sheet seemed too much to bear. One hundred degree days were one after another, a record breaking heat wave that had television weather forecasters and radio DJs jabbering excitedly.

At the time, I was heavily pregnant with my second child, and had a one-year-old daughter, Olivia. Some days, I would pack the baby up in my old car and drive to the grocery store or Walmart just to walk around in the air conditioning. My hair was constantly damp against my head and I felt always out of breath, the humidity in the air seemed to steal any good oxygen I took in. We lived for the occasional thunderstorm, just to breathe some cooler air.

I was due October 11 and had an appointment with my doctor on October 7. He was concerned, he said, because my first baby had been an emergency C-section, and I had plans to deliver naturally this time. A family member of his had died and he needed to leave the country unexpectedly, and he was worried another physician wouldn’t pay enough attention to the possibility of uterine rupture. “You might die,” he told me. “You could lose the baby.” I was hot, gigantic, miserable and terrified, so when he said he wanted to induce my labor so he could attend the birth, I agreed. We made our plans: I would make arrangements for Olivia, finish readying the baby’s room, pack for my hospital stay and have my husband notify his work that he needed the time off. I went into action mode, making calls and settling my plans. My husband took me out to dinner and we grinned through the entire meal.

I was excited because the hospital was air conditioned.

We hadn’t found out the gender of the baby. I liked having it be a surprise, but everyone who had an opinion or a guess thought I was carrying a boy. We had a boy’s name picked out: Collin Phillip. My sister wanted me to name a boy Levi, and reminded me about it every time we hung out. If it turned out to be a girl, I knew I wanted the middle name to be Grace; my first daughter’s middle name was Faith. John’s choice for a girl name was Alyssa, and I liked it well enough, but at the time it was a hugely popular girl’s name, and a woman at our church had just named a her daughter Alyssa Grace. I wanted something a little bit different.

We showed up in the early evening to check in at the hospital. Everything seemed to be going dizzyingly fast, the meds and the IV and forms that needed signing and the nurses and doctors checking me. Contractions started quickly, and by the middle of the night were down to three minutes apart. I had a back labor and it felt like my hips were shattering every time a contraction hit. I cried and threw up several times, but I tried not to scream because I knew my family was just around the corner and had my daughter with them, and I didn’t want to scare Olivia. My nurse’s name was Devota. She was a night nurse, but stayed well past her shift so she could remain with me. Mom came in and rubbed circles on my back and kept my long hair out of my face. Dad came in, looked at me and promptly threw up. By mid-morning, I was confident the labor was never going to end, and I told Devota I had changed my mind and wanted to go home. She talked me into an epidural, and I waited for the relief to come and bring me rest, but it didn’t happen. The doctor came in and placed a second epidural, and again, I waited for the relief my friends had told me about. You won’t feel a thing, you can sleep until it’s time to push, they’d told me. Lies! It became evident I was in the miniscule percentage of women the epidural didn’t work for. The pain intensified, and I’d been hours with hard contractions two minutes apart. I wanted to scream, but instead I put my fist in my mouth and bit. I kept worrying Olivia would hear me and be frightened. John kept telling me to stop it, I was going to hurt myself. There came a point when – and I remember the moment with such clarity – my sister Charlotte was walking in to see how things were going, and as she came around the privacy curtain, I had just put my fist in my mouth again, biting hard against the contraction that enveloped me. John reached out and smacked my hand away from my mouth. “Quit doing that!” he scolded. And I reached right out and grabbed his arm and chomped down on it. Hard. “Ow!” he shouted and looked at my sister. “She bit me!” Charlotte’s mouth hung open for a minute, then she shrugged and told him he shouldn’t have done what he did.

I bit him because he had shoved my hand from my mouth, and also because he was eating a glazed donut.

The pain was so great, it felt like every nerve fiber within me was on fire. My skin hurt. My hair hurt. My eyelashes hurt. Devota and my doctor whispered near my bed about the possibility of another C-section. “No,” I told them. I wasn’t doing that again. The problem was that my baby was lying diagonally in my abdomen, and her head was slamming against my hip. The solution was to twist me into randomly and ever-increasingly uncomfortable positions until she straightened up.

And finally, after about 14 hours of labor, it was time to push. The marathon was nearly over.

It only took another two and a half hours to receive my prize.

Another daughter. I was relieved and elated and exhausted, so I burst into tears and started sobbing.

My husband shushed me, and said if I would only stop crying, I could name her whatever I wanted.

I named her Savannah Grace.

There was a little problem with her breathing, so they whisked her off to have her checked out, and I cried again because I wanted to hold her so much.

Once she was declared healthy and perfect (which I already knew), she was brought back to me and I held my little girl. I felt as if I was in some magical world where every good thing that ever could happen was happening, right then, to me.

My family came in then, and they took turns holding her and crying and laughing and rejoicing in the perfection of Savannah.

I cannot believe how quickly she has grown from my little baby girl who hated having clothes on, to a toddler who loved Tonka trucks and building blocks, to a young girl who loved crafts and music, and now to a musically inclined young woman with amazing creative talents. My daughter has become an admirable person who is compassionate, empathetic, and fiercely loyal. And of course, she is stunningly beautiful.

Every day, she makes me prouder than the day before.

Happy birthday, Savannah. I love you more than the stars in the sky. 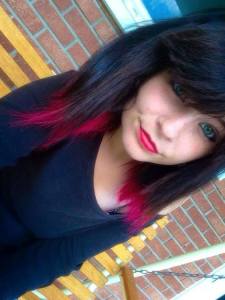